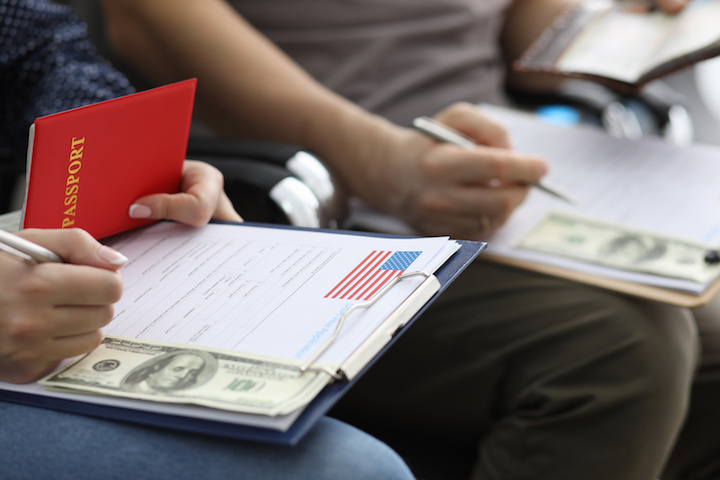 Cristian filed an application with USCIS in order to get his citizenship while his green card was still valid. Within a few weeks he completed his fingerprints and after passing his exam to become a citizen of the USA, got an appointment for his Oath of Allegiance, the final step to become a US citizen. Although he had two prior arrests when he was very young, for public urination and having a pocket knife, he was still eligible for his citizenship due to the charges being dismissed and sealed. After waiting a few months his green card expired but he did not renew it since he had his appointment date and expected to become a citizen. In just 40 days before his Oath appointment, Christian was arrested for driving under the Influence of alcohol (DUI) which the State classified as a misdemeanor; he pleaded guilty, paid a fine and completed his courses for prevention of alcoholism as dictated by the state Court.  All of these happened before his citizenship appointment. A violation typically DOES NOT affect most immigration processes. A misdemeanor may affect a legal permanent resident in many different ways.

When he arrived to USCIS and presented himself to the officer to take his Oath- they did not allow him in.  They told him to go back to USCIS because there was a problem with his application.  Later on he received a letter from USCIS denying his Citizenship application (N-400.) He sent USCIS a Certificate of Disposition proving that his arrest was a violation, not a crime but his application remained as a denial.

Cristian came to see us because he was very upset about the decision and wanted to appeal.  An appeal in his particular case was not worth doing because the 30 days USCIS gave him to appeal, were about to expired and he failed to disclosed the arrest when he presented himself for his Oath.  Instead we suggested a new application with enough letters of recommendations to show his good moral character.  We did it and when he had his interview we went with him and it was approved.

He is now a proud United States citizen and feels free to travel and live in or out of the USA.

The attorney Mercedes S. Cano is available for speaking engagements and workshops on immigration and business leadership.